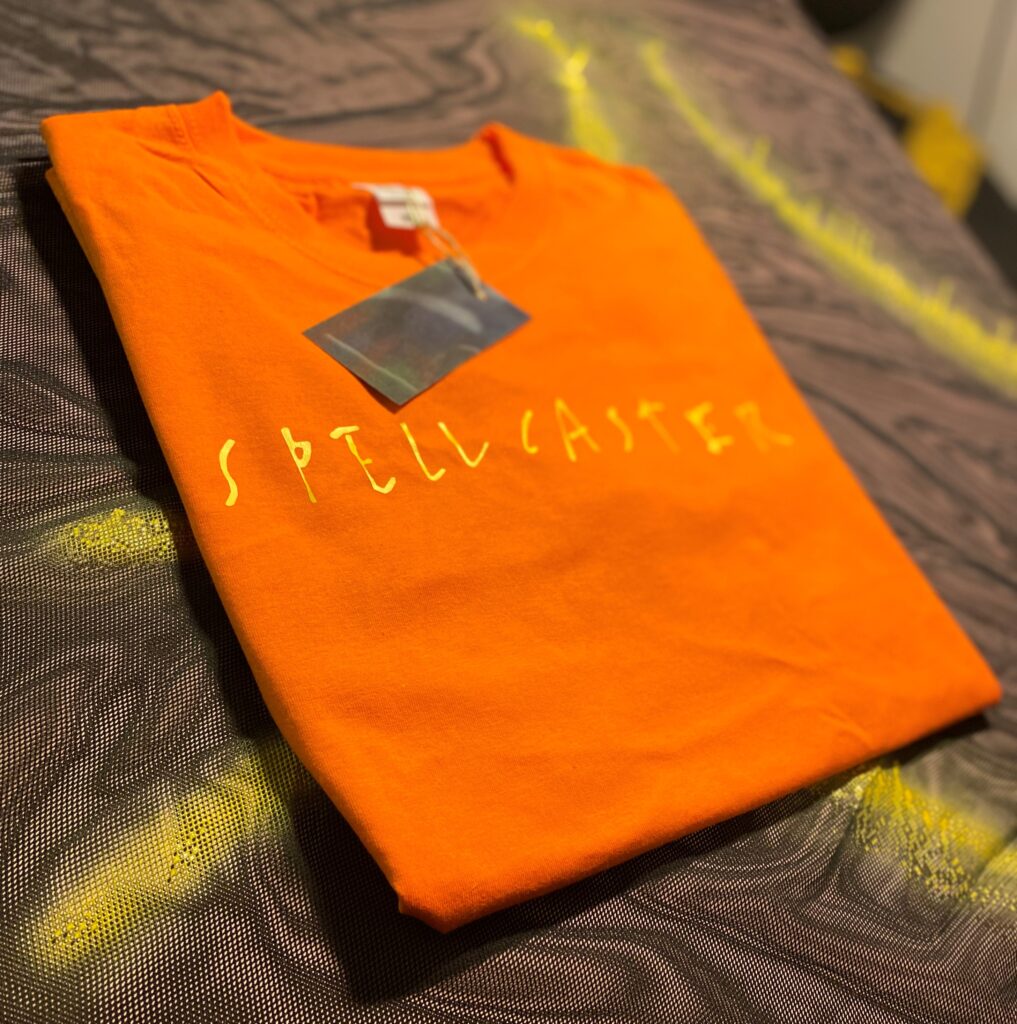 The album is the first embodiment of the already released ‘Inventory’ that now has gained its final level.

Other than making the album wearable (!), ‘Inventory – Expansion Pack’ augments the initial album with five new tracks. Here Spellcaster discloses a new intimacy with the compository process, suggesting alternate listenings, zoom ins and outs on the landscapes, altered versions and parallel worlds, all informed by a narrative structure related to rpg understanding.

The t-shirt both functions as a backdrop as well as a new self-perception towards the entire body of work.
In one way a jest on the golden times of copping and wearing your favorite band merch all the while warped into to the digital platform age.
In another – new links, connections, codes, as to leave the work open-ended:
story creating story creation.

On “Inventory”, Holger Hartvig is alone (but in the company of featuring spellcasters), while he brings the same curious vision into his first solo work, which consistently defies labelling. Take “Driftwood” – soaring weightlessly in the cool Imogen Heap-like crispness of sweeping distorted vocals and a symphonic use of gorgeous guitar mosaics. Or “Hollowalk”, introducing swaying fresh water lead vocals by Danish artist Cæcilie Trier (CTM). Or the strangely dystopian banger “Path”. The album is full of clashes between electroacoustic soundscapes and human voice in several shapes, negotiating complex emotions towards the greater changes in our worlds.

Spellcaster says about the album:

“A spell collection on voice and memory, timeleap and timelessness. the voices and memories being the strings in a textile of realities. driven by the wish to create story-creators, is the spell collection asking? becoming bard in harmony with fellow spellcasters, transmitting data, a bell rings”

“Inventory requires careful listening to appreciate its various textures and intrinsic richness, forking constantly on slippery roads, offsetting its melodies from its axes to offer them a beauty with the use of sound. An unclassifiable opus with intriguing atmospheres. Very strongly recommended”

“On the album Spellcaster multiple times insists on the narrating voice as a necessity for creation and maintenance of individuality, community and reality. (…) To me ‘Inventory’ is a consistent piece, that both lyrically and musically evolves on a level that few others in the kingdom can uphold.”

“Did the album ‘Inventory’ by Spellcaster herald the invention of “Anthropocene Folk”? Is this how it sounds when musicians fostered in pop culture becomes older and begins to read critical theory?”